Nothing dates faster than the future.

The 1936 science fiction film ‘Things to Come’ featured several real aircraft in the present, and near future, and more, completely fictional aircraft as part of the narrative in the future, the last appearing  in ‘2036’. A great run down of the various aeroplanes with stills are here in the Internet Movie Plane Database. 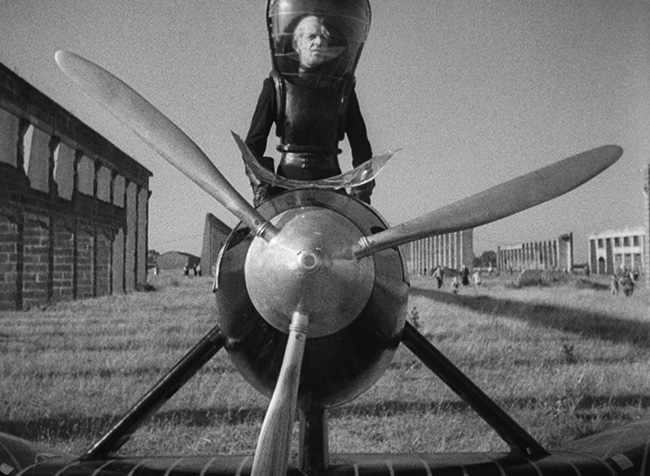 While they, and their context would’ve seemed very futuristic when seen in the cinema, today it’s very hard to get past the other details and aspects of the designs that lock them into their period they were designed within.

These three images show a carefully designed non-flying aircraft that was prominent within the film, registered as WT34.

It bears examination in layers. First is the very credible attempt at future design. Secondly comes the design elements that lock into the pre-war period; the propeller design, the footstep and gun(?) port on the nose, the pitot tube on the tailplane for instance. All these designs were different looking within the decade. Lastly, what they got right – the pressure suit with the goldfish bowl helmet – wrong in detail, right in principle. The unconventional aircraft layout, beyond the expectation of period aerodynamic driven design, looking towards some of the original and or computer controlled more modern designs.

Something different, then, and now.

Images from various PR sources and this interesting blogpost here. More, including some nice photographs of models from other aircraft in the film here.