Today’s something different again. Here’s the postwar painting entitled ‘Bomber Crash’ by Australian Frank Hinder, who was working with the Camouflage Wing of the Royal Australian Engineers during World War Two. At first it seems to be a semi-abstract fire image, the details become evident as the picture is read.

Held in the Australian War Memorial (AWM) collection here, their caption explains: “In 1941 Frank Hinder’s Lockheed [Hudson] bomber, in which he was undertaking an aerial reconnaissance mission, crashed in Rabaul. The work ‘Bomber crash’ is a synthesis of the exotic environment in Rabaul, the dreadful experience of the plane crash and Frank Hinder’s strong philosophical beliefs. Hinders concern is for the composition of the inside and outside of the plane and for the plane’s occupants. The plane is presented tail first, double rudder [twin vertical tails] at the bottom and the fuselage, now elongated, rising vertically from the centre foreground. The wings spread edge to edge horizontally across the middle, dark smoke and flames billow off centre to the top. Through a process of resolution his subject develops from the specific incident of the disaster to the universal idea of the regenerative power of fire. ‘Bomber crash’ is made up of semi abstracted forms, rampant flames and billowing smoke are the prime elements. From among this heat and fury arises the head of a phoenix, a mythical bird and the symbol of the regeneration of life through fire. Its wings surround and protect the men within.”

Hinder also remembered the event in this account: “Corporal clutching at seat with eyes popping – me the same way – plane swung straight and crashed … lot of noise and racket, tried to protect head and face waiting for next bump and crash. Came to rest and flames shot up all round … Before door opened wondered what it would be like to be incinerated.”

Not produced by an official war artist (not Hinder’s role) and painted well after the war in 1949, it is reminiscent of other works by him as here, while he explored the event with a remarkable number of diverse wartime artworks and studies as seen here. 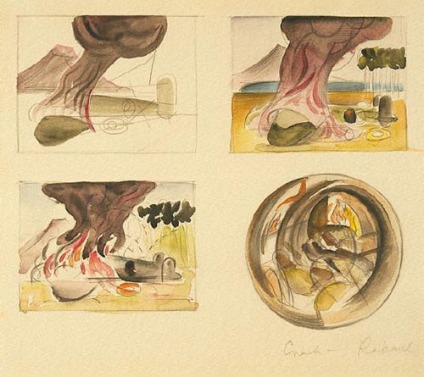 But Hinder is, in some ways more interesting and unexpected in other wartime and military aviation aspects, given his job of enabling camouflage and developing items such as the ‘Hinder Spider’ and the dummy aircraft the ‘Hindup’. From the excellent AWM article, by Dr Ann Elias, senior lecturer at Sydney College of the Arts, University of Sydney, online here: “Hinder also designed dummy aircraft, the drawings and photographs of which are in the Australian War Memorial among his personal records. They were made of hessian, timber and wire, able to be erected quickly and easily, and must have looked far more convincing from the air than on the ground.”