Today we are lucky to have a Friday the 13th, so here’s a look at a particularly unusual nose art. We start with a rare wartime colour shot of the nose art on Handley Page Halifax LV907 on public display on the heavily bombed Oxford Street, London. The text: “As ye sew so shall ye reap.” was particularly appropriate in this context, the Halifax bomber having been a weapon used to take revenge on the nation that made the bombsites on Oxford Street in central London.

Here’s the story behind the artwork, from the Yorkshire Aviation Museum:

“Why “Friday the 13th”, surely an unusual name to give an aircraft? The story goes that 158 Squadron had lost seven Halifax aircraft with the registration letter F in succession, within a year. When Halifax LV907 was delivered to the Squadron, it also bore this ‘unlucky’ letter, which had caused many crews to become nervous of flying aircraft with this code letter, and was given to the charge of Pilot Officer Cliff R R Smith and his crew. “Smithy”, in his characteristic ‘stuff and nonsense’ attitude to this fear, decided to break this jinx, by giving the aircraft its ‘unlucky’ title, along with the decals of the Grim Reaper and an upside down horseshoe, which he painted on. It is even noted that an open ladder had been painted above the crew entry hatch, which they would have to pass under to board the aircraft, but it was deemed this would be taking things too far and its removal was ordered.” 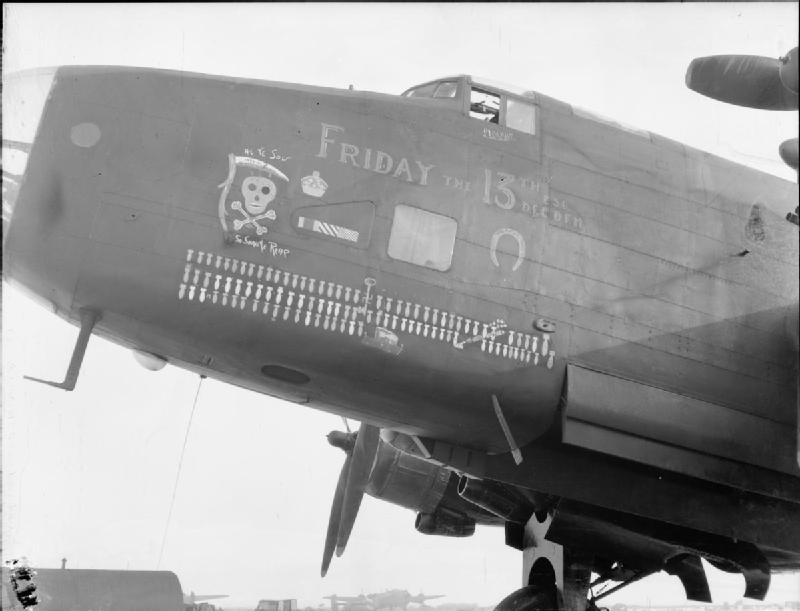 Note the slight differences in  the art in service above, and on London display outside the bombed out Lewis’ department store, as the Halifax was being re-assembled in the city, below. 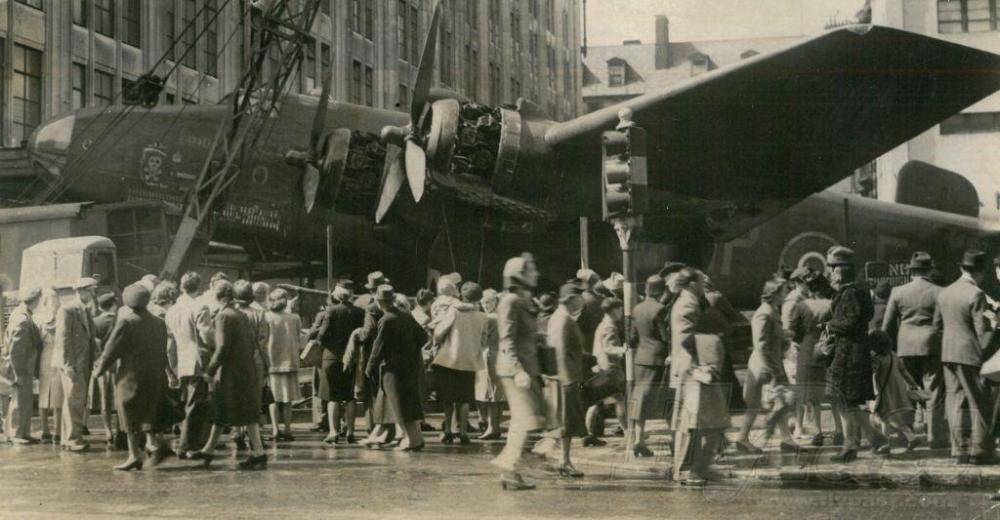 The image above shows ‘Friday’ with a (l – r) Royal Navy Fairey Firefly, RAF Bristol Beaufighter and Hawker Tempest, the the interest – and disinterest – of the locals. What does it mean? “The bomb symbols are obviously records of missions with the yellow bombs indicating night-time raids and the white bombs , daylight missions. The inverted horseshoe, skull and crossbones and grim reaper are there to confront the myth of bad luck. It worked, as ‘Friday the 13th’ became one of the luckiest aircraft of the war, completing a record 128 missions.” The other symbols include medal ribbons and medal acronyms, and a crown, updated at the end with the aircraft’s type off to the left.

Perhaps unsurprisingly, ‘Friday’ was scrapped soon after display, but the nose art (source) was kept and is in the RAF Museum’s collection, seen when on display here above. (I’d like to link to the RAF Museum’s online record, but it doesn’t exist. Here’s another PDF on nose art from the museum however.) Thanks to the postwar situation of the UK, every Halifax was eventually scrapped, with none surviving, until two underwater wrecks were recovered (another on the way, with luck) and this one below:

The excellent Yorkshire Air Museum recreated a Halifax from wreck parts and other material and have a new ‘Friday on public display, the photo inspiring the post from here.

And a PS. You could buy, at the time of writing, a recreation of ‘Friday’s nose art on Etsy, painted onto a piece of Halifax wreck, here: “This is a piece from a Handley Page Halifax that crashed in WW2. It is from an aircraft recovered in Germany. It has numerous part numbers and inspectors stamps on the parts. Inspectors stamps are EEP = English Electric Preston, who made Halifax for Handley Page. This is a wing access panel. It has been painted as Friday the 13th one of only four Halifax to achieve 100 missions.”