Today’s poster and photograph seems clear enough wartime recruitment propaganda, but there’s a bit more to them than meets the eye.

Here a woman factory worker is fitting a mount to a clear acrylic dome structure. It’s a nose cone for an American bomber, in this case a Douglas built Boeing B-17F and her head is through where the optically flat glazed panel will go that allows the bomb sight to aim correctly. But to the people looking at it, this would’ve been a remarkable piece of high technology, though common enough to us today. Acrylic moulding (often known under the trade names of Perspex and Plexiglas) able to take the forces of 30,000 ft altitude and 300mph plus speeds were one of the remarkable technological developments spurred on by World War Two. The contemporary viewer would’ve seen it as something very special.

Original caption: “This girl in a glass house is putting finishing touches on the bombardier nose section of a B-17F navy bomber in Long Beach, California, She’s one of many capable women workers in the Douglas Aircraft Company plant. Better known as the “Flying Fortress,” the B-17F is a later model of the B-17 which distinguished itself in action in the South Pacific, over Germany and elsewhere. It is a long range, high altitude heavy bomber, with a crew of seven to nine men, and with armament sufficient to defend itself on daylight missions. Photo taken in October, 1942. Alfred Palmer/OWI/LOC”

The apparently straightforward shot was also, like almost all propaganda photos of the period, carefully posed and constructed; the lack of distracting background, the smears on the glazing to ensure it’s visible and ‘worked on’ as well as her ‘at work look’ actually was carefully groomed and crafted, with details like the wedding ring and badge clearly presented and highlighted. There were a lot of photographs of women aircraft construction workers in this group, many of the famous ones by Alfred Palmer for the Office of War Information (OWI) and there is a particular carefully crafted apparently ‘natural’ look to them, as well as the special Kodachrome colour slide film used which gives them a particular colour palette.

A good collection of the images here from The Atlantic. A PS would be the story of the 1939 ‘Pontiac Ghost Car’, which was a standard model car of the year constructed mainly out of acrylic. Great coverage here. 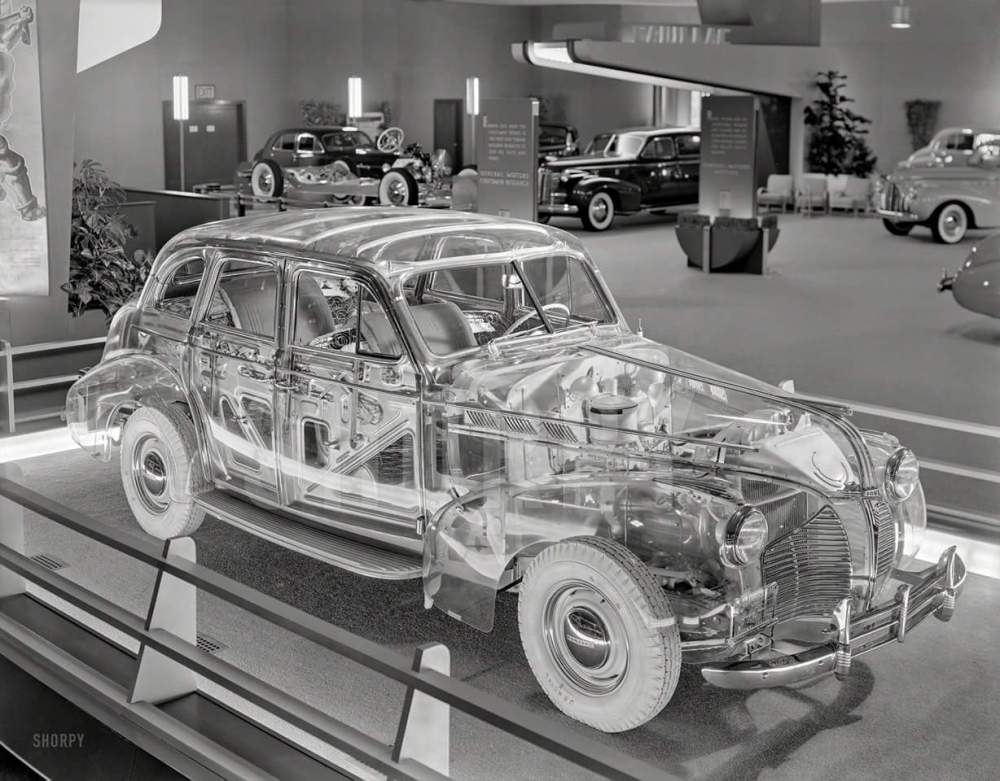