A typical crashed Messerschmitt Bf 109E during the Battle of Britain.

Oberleutnant Karl Fischer of 7/JG27 crash-landed his Bf 109 E-1 in Windsor Great Park,  on 30 September 30, 1940. He force landed after being alerted by his wingman to his fuel loss due to hits from earlier combat, meaning he would not be able to get back to occupied France. [Photograph from the late Jack Gilles collection, via Maurice Austin]

What makes it of interest to us is the civilian man in the hat, watching the RAF armourers by the starboard wing. It’s apparently Paul Nash (11 May 1889 – 11 July 1946) war artist of both the First and Second World Wars, and we have both another photograph, and one of Nash’s paintings from this event. 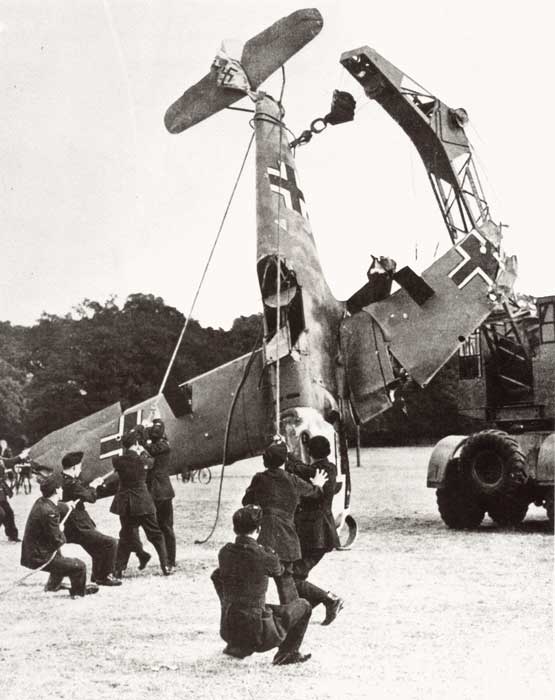 The Messerschmitt flipped over on crash landing, and is being righted by the crane and RAF airmen. Source: Battle of Britain Memorial.

Nash produced the watercolour we’ve seen above (now in the Tate, like much of his collection) from the crash and recovery of this Messerschmitt – but it wasn’t the only one, here’s another paired photograph and painting, again from the Battle of Britain Memorial (BoBM) website.

Entitled ‘Encounter in the Afternoon’, it features the Bf 109E flown by Unterofficer Leo Zaunbrecher from 2/JG52, which came down at Mays Farm, Selmeston, Sussex on Monday 12th August 1940. It had been shot down by P/O JAP McClintock of 615 Squadron.

Thankfully, Kenneth Clark managed to get the War Artists Advisory Committee to agree to put aside £500 to purchase works from Nash on the theme of aerial conflict. This is where two of his greatest works were to appear.

First, and my favourite, ‘Totes Meer’ (‘Dead Sea’ in German). One of the most remarkable war artworks of all time, it is a perfect combination of the story, the artist’s surrealism, and the technology and landscape of wreckage he studied.

We can see clearly his brilliant idea of combining the wrecked aircraft with the visual metaphor of waves breaking on an intransigent, moonlit British beach (echoing the beach that would be ‘fought on’ in Churchill’s speech). It is a brilliant conception. But we must not overlook Nash had a patriotic, propaganda layer beyond the obvious. He stated he included only German aircraft as part of the pile, despite the British aircraft parts visible to the knowledgeable in his photographs.

This was both by showing the German markings (note the cross and ‘B’ visible, above left) but also items such as the recognisable German style tailwheel in the centre of the right hand image below, probably from a Dornier Do 17Z, and excluding the framework shapes of the British fabric covered biplane and  Armstrong Whitworth Whitley wing seen clearly in the photographs above. (Image sources, the Tate, 1, 2, 3, 4.) 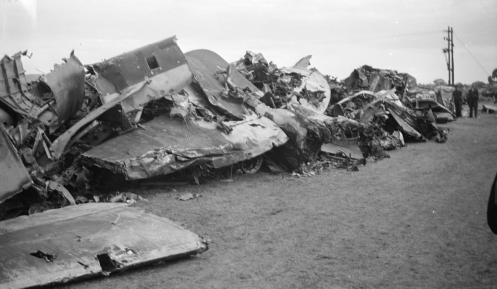 It’s demonstrated by his records (notably these photographs and notes) that Nash had not just his firsthand experience of warfare, but that he was interested in the look of the technology of aircraft he was depicting in the Second World War, as demonstrated above.

His depiction of enemy wreckage is technically similar and as adept as Eric Thake’s more whimsical Pacific War wreck art seen here, but contrastingly making a crucially political point. It’s notable that Nash was painting when the risk of losing seemed very real, while Thake was near the end of a to-be-victorious war, this context being very evident both to the artists and the authorities backing them, and thus influencing the art they could produce.

Nash achieved all this despite being terminally ill with complications from his long-term asthma. His anthropomorphic aircraft could have lost us his later masterpieces, ‘Totes Meer’ and the equally important and original ‘Battle of Britain’ (in the IWM collection) below, which would’ve been a tragedy.

The operatic scope of ‘Battle of Britain’ painting has been well explored elsewhere. Here it serves as a contrasting take to ‘Totes Meer’ and showing Nash’s vision, always embedded from the beginning of his career in landscape, could take a greater vision than the mechanically technical as seen in the Messerschmitt artworks we started with. Nash was clearly happiest in landscape painting, like his friend and colleague Eric Ravilious (who we have looked at before, here and here) but Nash’s war art was (in both great wars) that of the broken landscape – the shell-shattered Western Front (exemplified by ‘We are Making a New World’ in the IWM collection) and the mythic, allegorical German Luftwaffe’s broken wave of ‘Totes Meer’, also discussed specifically here (BBC) and here (BoBM).

Like many great artists, he was frustrated by difficulties achieving his artistic vision, particularly in his later wartime career – but we are certainly privileged to have his uniquely illuminating take on the remarkable events of the Battle of Britain.