Today, rather than the perennial posters, here’s a nice souvenir, via Twitter contact Rob Feeley, of a metal cigarette case with an embossed Blackpool tower on it. But what catches our interest is the airliner passing the tower on the right. 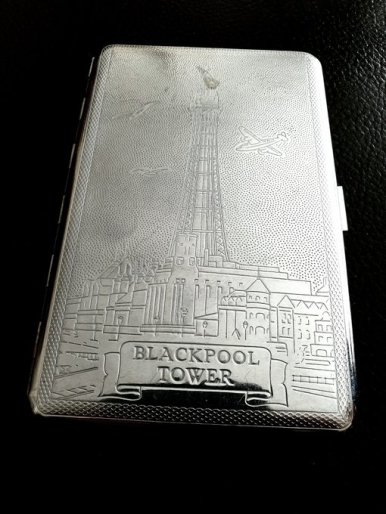 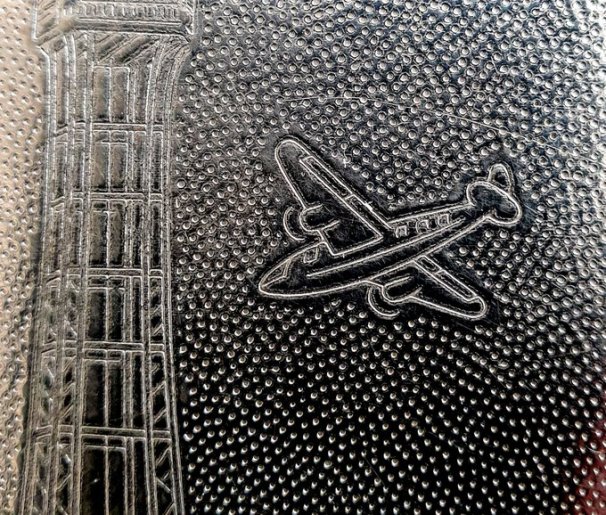 Now, while Blackpool has had a significant history of pleasure flying aircraft around the tower, this isn’t a specific one of them – it’s a generic airliner design, one key reason for featuring the case here.

Interestingly the case has no hallmarks or dates on it, and other examples get listed online with various random dates ranging from the 1930s to the 1950s. Rob’s had his for at least fifty years himself. I think we can, by ‘reading’ the design features, narrow it down a bit further. The design cues including the leading edge wing sweep, with a straight aft edge, similar to the DC-3 family, but a mid wing, so not a DC-3. The rounded, not stepped windscreen and nose shape, rounded, but not swept tail surfaces, with the twin radial engines, large rectangular windows, mean to me it’s a ‘futuristic’ design from the late thirties early forties. By the 1950s, the aesthetics had changed, and jets were the thing for the future then.

It was, and is, common to use a generic design to avoid association with aircraft makes or airlines in certain cases, as the ‘Bland Name Product‘. That’ll be what’s happened here, and a nice little unique item it is as a result.

From Rob’s Twitter feed here. If you want one they’re available via the usual online auction sites.