Here’s a remarkable item, a 9 x 21 cm recruitment brochure for the British Woman’s Auxiliary Air Force (WAAF) of the Second World War in Hebrew, aimed at a Jewish audience. 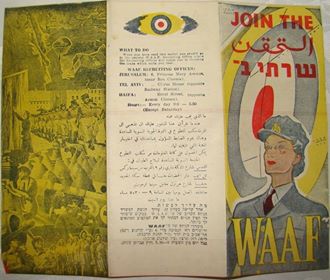 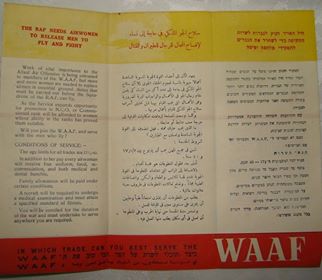 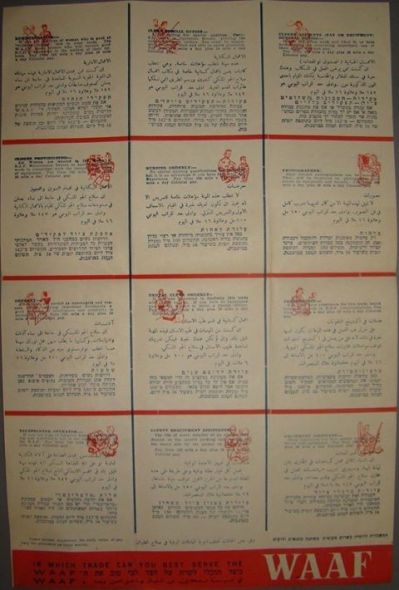 Found on e-Bay, and passed onto me by Kiran Toor, the sales details give the background:

“The Yishuv [Jewish community in the land of Israel (Palestine)] saw itself as part of the struggle against the Nazis, and the call for women to serve and enlist, just as many of the men enlisted, was heard from the beginning of the war, despite the opposition of religious elements. The initiative to establish a women’s auxiliary force came from the women’s organizations in the Yishuv. In December 1941, the British agreed, after lengthy negotiations, to enlist Palestinian women.
However, it turned out that there was strong opposition to this recruitment by men, and especially among the kibbutz movements. Behind all the practical arguments in which the opponents of the women’s recruitment tried to explain their position was an irrational feeling of fear of violating the Jewish woman’s honor. However, since it was clear to members of the Jewish Agency Executive that the British would carry out the recruitment of women without the Jewish Agency, most of them would be preferred as a joint venture. The women’s volunteer movement was also a protest against the deprivation of their status in the military sphere in the community. Indeed, one of the indirect results of their struggle was a change in the status of the company in defense and acceptance of the ranks of the Palmach. Despite the objections and reservations, at the end of December 1941, the first group of conscripts was concentrated. By March 1942, 519 Jewish women had enlisted.
In April 1943, the Royal Air Force announced the start of recruitment of women to its ranks in units called WAAF. The RAF sought mainly clerks, as well as professional workers in the fields of communication and photography. The volunteers for the Air Force initially concentrated in Palestine and Egypt, and here their main concentrations remained until the end of the war.”
As one might expect, the poster isn’t an entirely original work, but the figure seems to be related to this poster of the WAAF, but with the distinctive British roundel made more prominent, and perhaps politically advised, the Hebrew example also has the flag removed: 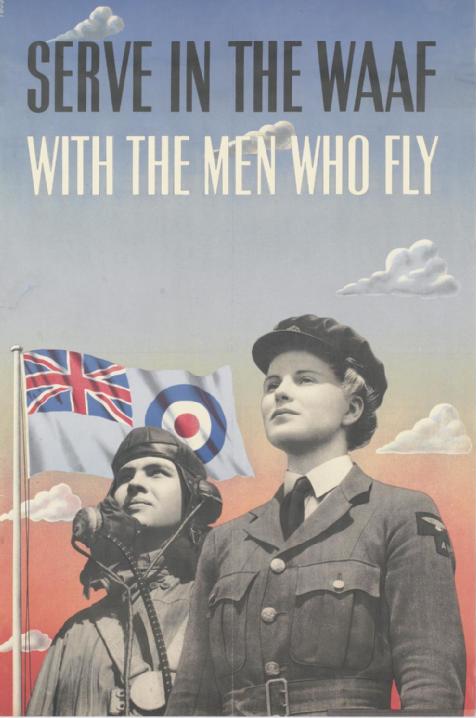 Entitled: ‘Serve in the WAAF with the Men Who Fly’, it’s by Jonathan Foss, from Lowe and Brydone Printers Ltd, and made for His Majesty’s Stationery Office and the WAAF.

As has so often been the case, the art and design we look at here reveals more social history than just the art and aviation alone.