Today’s Poster. When an airline ‘owned’ the world. Today we are used to a diversity of airlines and cheaper carriers, so it’s easy to forget where each nation basically had one, national flag carrier. 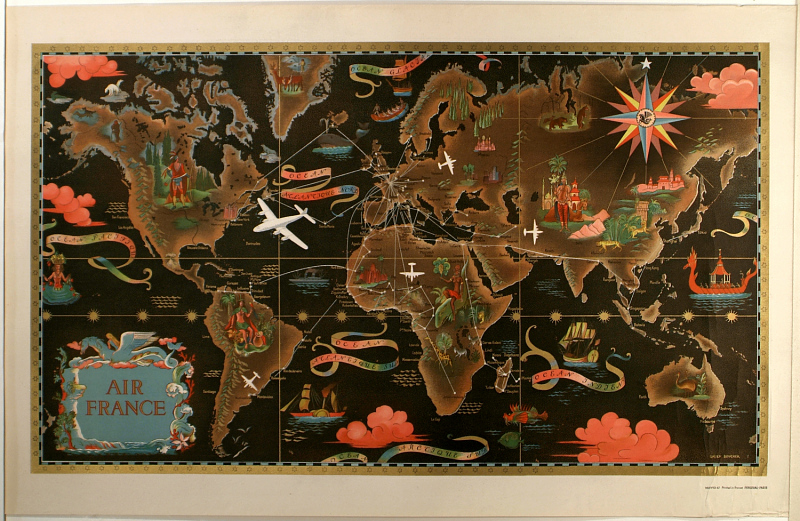 Here it’s Air France, by Lucien Boucher. As you’d expect, this brings not just their routes (almost an afterthought) but their world view, their colour scheme and not least, the pre-eminence of the Francophone world.

It’s 1947. Here another layer is the exotics of a far flung world for a vieweship very conscious of the mother country being only just being retaken from recent occupation and with major privations and rationing in place. Attractive seeming overseas destinations would prove to be literal graveyards in a few years too, such as Algeria and Vietnam, as the only-just seen decolonisation movement gained strength. It all depends on where you stand and where you start.

A history note from the last linked item below; ‘Stanford University (David Rumsey Map Center) holds three examples of this map, two that are dated to 1947 and one that is dated to 1948. The 1948 map matches the text at left and right below this example; a note elaborates: “Date is estimated. Routes shown are both expanded in the Americas and contracted in Asia (route to Japan is not shown, only to China), compared to our two 1947 examples.”‘

From the National Air & Space Museum website. A reasonable size image can be downloaded from here, there normal poster search offers a less adequate one here. Update: A commercial issue, adding a bit more information from here.