Holding records was a matter of pride in the inter war period, while today the human element and the understanding of how hard that extra reach is to do has gone. 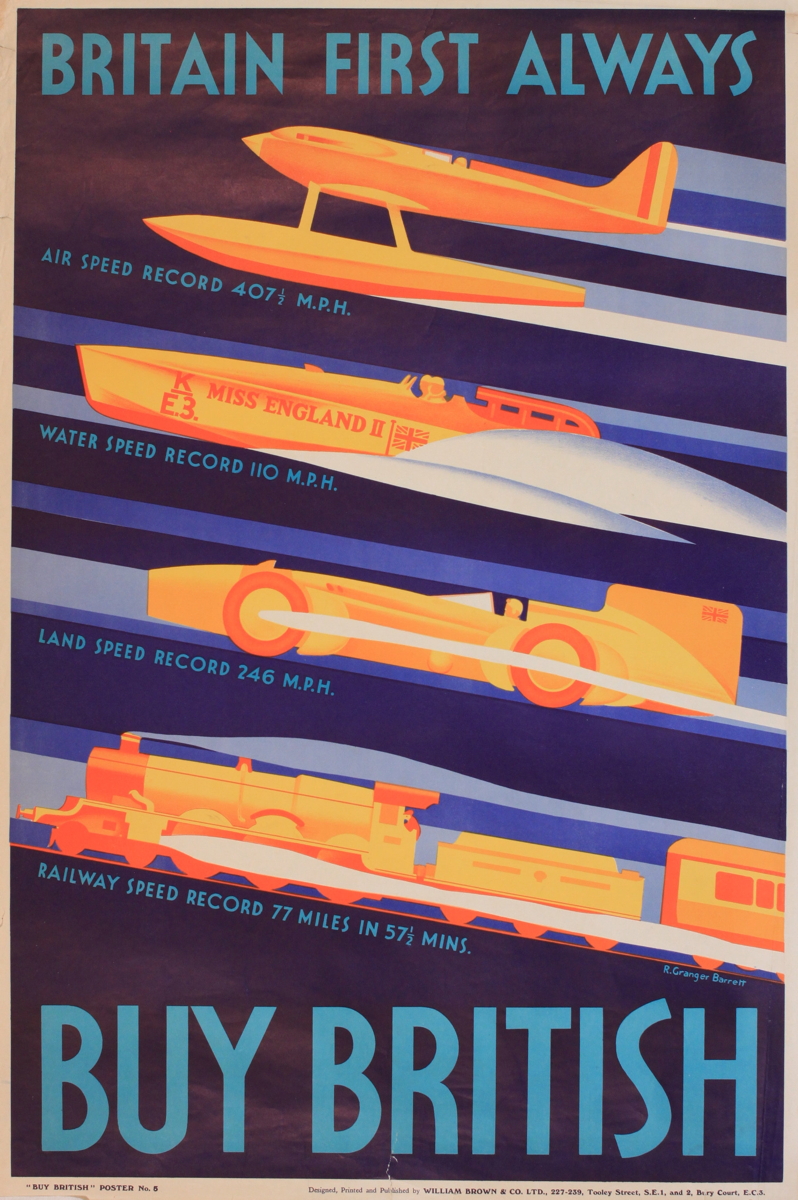 To hold four records at once was a greater achievement, even with the resources of one of the world’s leading industrial nations deployed.

Here the strong design by R Granger Barrett, from the British Empire Marketing Board depicts the four record holders in profile, choosing a strong and striking orange over blue/black background in an Art Deco or more precisely Streamline Moderne style.

Intriguingly, none of the vehicles were in orange in reality, and the ‘British racing green’ that was widely recognised wasn’t chosen either. Design trumping accuracy. More notable is that none of the four vehicles is named, a function of public familiarity with these achievements through newspapers, radio and cinema newsreels. Today a member of the British public would be hard pressed to name one mechanical record holder, let alone these four, now historic machines.

The aircraft record features the Supermarine S6B of R.J. Mitchell, famously later the designer of the Supermarine Spitfire and the author’s speciality the Supermarine Walrus. The S6B was used to set the world record alluded to in the poster flown by Flight Lieutenant George Stainforth in 1931 after it had been used to capture the Schneider Trophy in perpetuity for Britain. Stainforth was the first human to travel over 400 mph.

The boat is Miss England II, as driven by Kay Wood, but notably another aeronautical connection as it was equipped with two Rolls Royce R engines, the same type as used in the air speed record of the time. The car is of course Donald Campbell’s Napier-Railton Blue Bird a third vehicle here powered by an aero-engine, in this case a ‘W’ or arrow configuration Napier Lion VIID.

Only the steam engine is not aero-engine powered. Matt Austin tells me it’s the Cheltenham Flyer, which travelled from Paddington to Cheltenham Spa (with stops along the way) at the figures given, for an average speed of 82 miles.per hour. The locomotive was GWR Castle class loco 5006, the Treganna Castle as built, and configured as it was in 1932.

The poster is the fifth in a ‘Buy British’ series, though I’m not familiar with the others – anyone?

Poster from the Onslow auctioneer’s 2018 online catalogue, as per the ‘Roundel Eyes’ post earlier.